A C++ framework for MDPs and POMDPs with Python bindings

This C++ toolbox is aimed at representing and solving common AI problems, implementing an easy-to-use interface which should be hopefully extensible to many problems, while keeping code readable.

Based on the "Artificial Intelligence" category.
Alternatively, view AI-Toolbox alternatives based on common mentions on social networks and blogs.

InfluxDB is the Time Series Platform where developers build real-time applications for analytics, IoT and cloud-native services. Easy to start, it is available in the cloud or on-premises.
Promo www.influxdata.com

Do you think we are missing an alternative of AI-Toolbox or a related project? 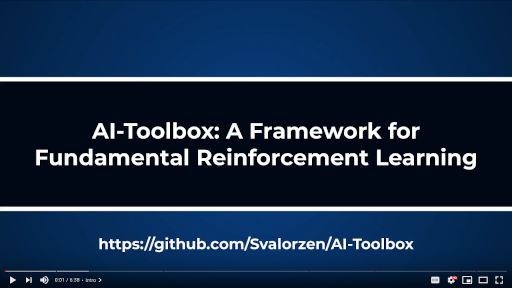 This C++ toolbox is aimed at representing and solving common AI problems, implementing an easy-to-use interface which should be hopefully extensible to many problems, while keeping code readable.

If you use this toolbox for research, please consider citing our JMLR article:

The latest documentation is available here. We have a few tutorials that can help you get started with the toolbox. The tutorials are in C++, but the examples folder contains equivalent Python code which you can follow along just as well.

For Python docs you can find them by typing help(AIToolbox) from the interpreter. It should show the exported API for each class, along with any differences in input/output.

Cassandra's POMDP format is a type of text file that contains a definition of an MDP or POMDP model. You can find some examples here. While it is absolutely not necessary to use this format, and you can define models via code, we do parse a reasonable subset of Cassandra's POMDP format, which allows to reuse already defined problems with this library. Here's the docs on that.

The user interface of the library is pretty much the same with Python than what you would get by using simply C++. See the examples folder to see just how much Python and C++ code resemble each other. Since Python does not allow templates, the classes are binded with as many instantiations as possible.

Additionally, the library allows the usage of native Python generative models (where you don't need to specify the transition and reward functions, you only sample next state and reward). This allows for example to directly use OpenAI gym environments with minimal code writing.

That said, if you need to customize a specific implementation to make it perform better on your specific use-cases, or if you want to try something completely new, you will have to use C++.

The library has an extensive set of utilities which would be too long to enumerate here. In particular, we have utilities for combinatorics, polytopes, linear programming, sampling and distributions, automated statistics, belief updating, many data structures, logging, seeding and much more.

Not in Python yet.

Not in Python yet.

To build the library you need:

Once you have all required dependencies, you can simply execute the following commands from the project's main folder:

cmake can be called with a series of flags in order to customize the output, if building everything is not desirable. The following flags are available:

These flags can be combined as needed. For example:

The default flags when nothing is specified are MAKE_ALL and CMAKE_BUILD_TYPE=Release.

Note that by default MAKE_ALL does not build the Python bindings, as they have a minor performance hit on the C++ static libraries. You can easily enable them by using the flag MAKE_PYTHON.

The static library files will be available directly in the build directory. Three separate libraries are built: AIToolboxMDP, AIToolboxPOMDP and AIToolboxFMDP. In case you want to link against either the POMDP library or the Factored MDP library, you will also need to link against the MDP one, since both of them use MDP functionality.

A number of small tests are included which you can find in the test/ folder. You can execute them after building the project using the following command directly from the build directory, just after you finish make:

The tests also offer a brief introduction for the framework, waiting for a more complete descriptive write-up. Only the tests for the parts of the library that you compiled are going to be built.

To compile the library's documentation you need Doxygen. To use it it is sufficient to execute the following command from the project's root folder:

After that the documentation will be generated into an html folder in the main directory.

To compile a program that uses this library, simply link it against the compiled libraries you need, and possibly to the lp_solve libraries (if using POMDP or FMDP).

Please note that since both POMDP and FMDP libraries rely on the MDP code, you MUST specify those libraries before the MDP library when linking, otherwise it may result in undefined reference errors. The POMDP and Factored MDP libraries are not currently dependent on each other so their order does not matter.

For Python, you just need to import the AIToolbox.so module, and you'll be able to use the classes as exported to Python. All classes are documented, and you can run in the Python CLI

to see the documentation for each specific class.